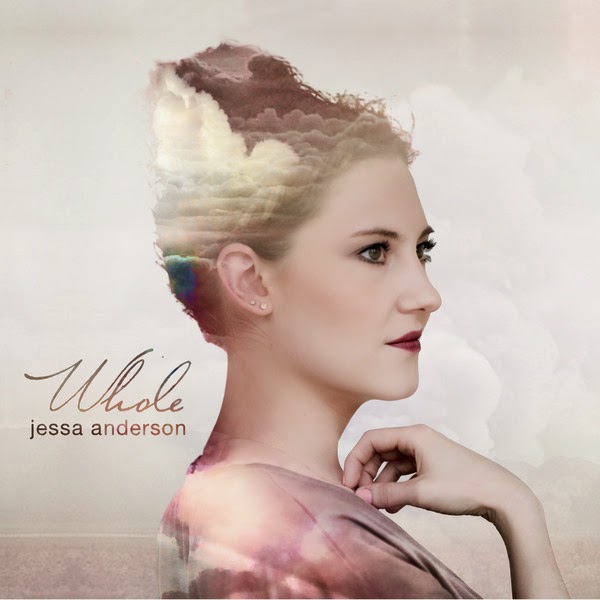 Meet Jessa Anderson, in case you have not. I remember the summer I got her debut with BEC recordings ‘Not Myself Anymore’ (which was actually her second record, her first being ‘Fundamentally Broken’)  it pierced me so much I dug out old pictures and took a reflective glance on my life and relationships and prepared to move into the future with renewed strength. Someone said that’s the power music brings with its hearing.

It easy to compare artists when you are writing about their music but Jessa has made that a hard job for me as a music writer. I am not exaggerating, this woman has a unique ‘voice’ (and I mean message/styling here) and it needs to be heard in this generation.

On ‘Whole’ her new record for 2014, the album opens up with ‘Idols’, a song that pulls off the carpet underneath anyone who might have heard the music of Jessa before. It’s a bit of a shocker as once you play the song, you might start to dance like it’s Nelly Furtado’s One Trick Pony, Katy Perry’s Birthday, or La Roux’s ‘I’m Not Your Toy’ that is playing off your stereo. It is also not a shocker in that the heart and ‘weightiness’ which usually accompanies Jessa’s music shines through making it a tension-ed and beautiful work of art. If you never thought you could dance and say a prayer at the same time, ‘Idols’ by Jessa Anderson would prove you wrong.

‘Stay’ is a song about a relationship about to go sour and at the point the chorus of the song is voiced, day is saved. Ah! I hope. Musically it is lighter than the usual pop/rock sound we heard from Jessa on her last record. ‘Giving Your Heart Away’ the first song I ever heard from this record while Jessa was still raising awareness via Kickstarter, is several layers of emotions and heart. You will definitely leave this one on repeat after your first listen. For the album version, drums are added and I am thankful  for that cause the original work of art was just too heart wrenchingly beautiful.

‘Everything’ my personal favorite is a dance of worship before God. I have not heard music that climbs, falls and anticipates in a long time since the days of, say Bjork like this one. With ‘Can’t Be Saved’ I want to sit with Jessa over coffee and hear the story behind this song. I love this song so much. It’s kind of dark. It throws at you the unbelievable and yet true. I love it. In fact, I really think this song deserves a great music video.

‘Caught Me by Surprise’ might remind you of the journal lyrics and whimsy voice styling of Amber Hunter. ‘Never the Same’ combines country and pop in a way that they go well. I like how Jessa uses music to express lyrics. Like on this song the first chorus line goes ‘sometimes you boom like a blast. . .’ and actually the chorus kinds of BOOMs in. ‘Breakdown’ will steal hearts away with lyrics such as ‘when you are the only one left standing, can you really say you've won. ‘Story of Grace’ shows vulnerability and at the same time, very deep worship. The album closes with the title track ‘Whole’. It’s a song that has a ‘Jessa singing to you at a bar’ feel and at the same time a ‘Jessa rendering a Sunday special in church as people come forward for prayer’ feel. It’s got so much room for response and feel and so much to ruminate over. It would make a great life soundtrack for this Easter period as it also offers an amazing story line of the Easter story.

About ‘Whole’ her new project, Jessa writes on her blog “Whole is the project I've always wanted to make. Through this 6-year journey of writing, creating, releasing, and touring, I have pushed myself to be real—to be me. The songs on this record feel so very me, and so very true to life. They are one woman’s perspective to be sure, but sharing that perspective is half the battle. Freely giving of our hearts and minds is what draws us near, what allows us to identify with one another.”


Art shouldn't just point us towards truth, it should leaves us feeling something and that’s what Jessa’s done with Whole. One of the great things about Whole is the artist’s growth since her last record. The sound is different and in a whole new zone. Also is the song writing and poetry. As a reviewer, you are expected to talk about ups and downs of a work of art you come across. Maybe I’m still blown off (and some where above the ground) by this project or maybe it’s just flawless. Honestly I have no downs for this (yet). It’s a press play album unlike Jessa’s last record(Not Myself Anymore) which though I liked, I had to skip some tracks.

You really should get Whole, it’s a complete record. Take it from me nothing is missing from it for the genre it represents. It's Whole.

Watch the Music Video for 'Giving Your Heart Away' here